“How do I stop pre-fight nerves affecting my performance and ruining all the weeks of hard training and preparation before a fight?” This is a question that I often get asked by students before a fight or competition.

Everyone gets Pre-Fight Nerves

The first thing to remember is that everyone gets nervous before fights. The only people who don’t get nervous are those who already know that they are going to lose. They have no need to be worried or put any pressure on themselves and already have all the excuses lined up for afterwards.

Even top level fighters are nervous and anxious before fights. There are numerous stories about top fighters such as Mike Tyson and Crocop being in tears and vomiting from panic and nervousness just minutes before stepping into the ring. Top level fighters have put in months and years of training and preparation and just have a short amount of time to make it all pay off. If top fighters appear not to be nervous it’s because they are acting in a confident manner knowing that appearing more confident will help them feel more confident.

Dealing with the Stress before it overpowers you

The first step to dealing with this stress is actually understanding what you are afraid of. You are not afraid of fighting. If you were afraid of fighting you would have many opportunities change your mind or find excuses to pull out in the weeks and days leading up to the fight.

The real reason fighters feel nervous before they compete is performance anxiety. You are afraid that you won’t perform at your best and that all your training will be a waste of time. The problem is that this stress can make you feel weak, unfit, tired and nervous which can contribute to you not being able to perform at your best.

Get used to this Stress and Use it

The next thing to understand is that the nervousness won’t just go away the more you compete. What actually happens is that you become better at dealing with it and using it to motivate you rather than negatively affecting your performance.

Getting used to the pressure doesn’t happen overnight. You need to take small steps and set goals to gradually get better at dealing with the stress and performing at your best under pressure.

Steps to getting better at dealing with pre-fight nerves.

You need to spend as much time working on your mental skills as you do on your physical skills. It’s good to find ways to combine both such as starting sparring from disadvantageous positions or pushing yourself to the point where you feel like quitting during fitness training to build your mental strength.

Mental Rehearsal – Don’t put off thinking about the fight or match until it’s too late because then all the stress will hit you in one big rush. Visualise the fight in the weeks and days leading up to it so you will gradually get used to the pressure and stress in small doses. Visualise getting your hands wrapped, warming up, the ring announcer calling out your name. If possible watch videos of your opponent as so you know exactly what he looks like and how he moves, imagine yourself fighting him so that when you actually do fight it will seem that you’re fighting someone who you’ve already fought or sparred with many times before.

Pre-Fight Routine – Have a few things that you do the day or night before every fight. For example watching the same inspirational movie, going for a walk on your own to think about the upcoming fight, listening to certain type of music. This will help build a feeling of consistency and familiarity to make you feel like you’ve been through all of this before. Don’t do things to avoid thinking about the fight or take your mind off it. You need to stay focused on what you’re going to do in a few hours time and make sure you are mentally ready.

Confident Mindset – Going into the match that you need a confident frame of mind. You need to be confident in your skills and ability and be positive and certain that if you perform at your best you will be able to win. The best way to develop this mindset is to think of previous times when fought really well or felt confident while you were in the ring. If you have never had an experience of feeling confident and positive in a fight then just think about a time when you felt confident in training.

Think of a time when everything went well and you were sure that you could rely on your techniques, where you felt fit and when your timing felt spot on.Try to remember how you felt during this time and the feelings and emotions that were going through your head. Then try to imagine you are back there doing the exact same thing. You need to practice this state of mind as much as possible so that you are sure that you can get back to it whenever you feel like it. The pre-fight routine mentioned above will also help you access your confident mindset more easily.

‘Just go in there and have fun’ – The reality is that you just have a short amount of time – 9 to 15 minutes to either win or lose the fight. That isn’t enough time to ‘have fun’ and ‘show what you can do’. What you need to be thinking about is going in and executing as perfect a performance as possible and not leaving anything to chance. What you need to be thinking is ‘I’ve only got a short amount of time, I need to execute my game-plan perfectly and make my opponent quit.’

‘I just want to get it over with’ – This attitude shows that you aren’t prepared to put in a big effort to win possibly due to the strain and exhaustion of all the training in the weeks leading up to the fight. What you need to be thinking is ‘I’ve already put in all the weeks and months of 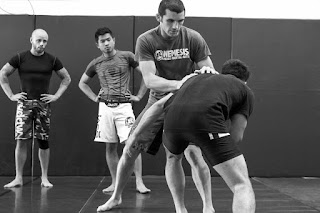 preparation and I’m prepared to fight for as long as it takes to make my opponent quit even if that takes two hours’.

‘I deserve to win’ – All of the training that you did leading up to the fight or your performance in previous fights is no guarantee of how will perform in this fight. If you are not switched on enough and you opponent is then he may still be able to beat you even if he is less skilled.

Don’t Run Away from it

Don’t try to avoid the stress – Just the same way that your muscles need stress from weights and resistance exercise to get stronger, the mental side of your fight training needs controlled amounts of stress to improve your ability to perform well in competition.